While Microsoft and Sony Sell Millions, Nintendo Gives Away Free Wii U Consoles To Thanksgiving Travelers 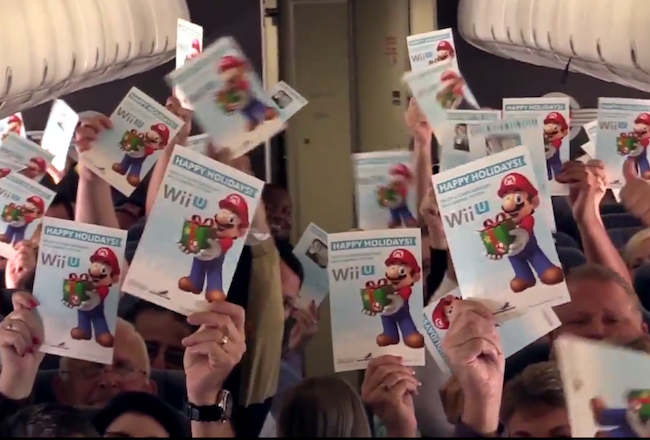 Maybe it's the only way to move product at this point: Nintendo surprised over 100 passengers on a Southwest Airlines airline flight on Tuesday by giving each and everyone a free Wii U console.

The travelers on Southwest Airlines flight 1883 from New Orleans to Dallas were greeted by Mario (that is Mario Mario) upon arrival at Dallas Love Field on Tuesday, after which they received a certificate for a free Nintendo Wii U video game console. In the airport, they received their presents and got an opportunity for a photo-op with Mario.

Of course it was a big publicity stunt for both Nintendo and Southwest Airlines, but for passengers, the surprise definitely made flying for the holidays less of a hassle. Nintendo, unsurprisingly, caught the reaction on video and posted it to YouTube.

The Japanese gaming company, in partnership with Southwest, also set up a Wii U gaming lounge in the airport, so bored travelers of all ages can test out the year-old console and consider it for this year's holiday season. The gaming kiosks will also be set up at other Southwest Airlines terminals during the holiday season in Dallas Love Field, Chicago Midway, Denver, Atlanta, Tampa Bay, and St. Louis.

"No one is better than Nintendo and Southwest Airlines at bringing friends, families and fun together," said Scott Moffitt, Nintendo of America's executive vice president of Sales & Marketing, according to Nintendo's release. "As Southwest's video game partner, our aim is to bring smiles to travelers and Southwest Employees through the fun of Nintendo video games."

For those who have decided to wait until now to get the Wii U, wait a little longer: Between the date of the first Southwest Airlines giveaway and Dec. 25, Southwest Airlines and Nintendo are giving away a total of 30 prize packages - one per day - to lucky winners who enter into their contest here. Each prize includes a Nintendo Wii U Deluxe gaming system, and, for even more incentive, two roundtrip tickets on Southwest Airlines.

As opposed to the Nintendo Wii, which sold 100 million units or more, Nintendo's follow-up Wii U has had a terrible year since it was released during last year's holiday shopping season. By September 2013, Nintendo had shipped fewer than a million Wii U consoles for the year. Compare that to the Xbox One and PS4, which each sold one million units within days or hours of its release. The Wii U was even eclipsed in sales during the second quarter by its seven-year-old predecessor, the Nintendo Wii, according to the New York Times.

So Nintendo may be hoping for a bit of a reboot. Maybe its new game, Super Mario 3D World, which the Times called "the best Mario game in years," along with the Southwest Airlines promotion can make a dent. With all the hype surrounding the two titans of console gaming, which just released their respective new, next-generation consoles, Mario could use all the help he can get.

Hopefully none of those Southwest Airlines passengers return the game system.