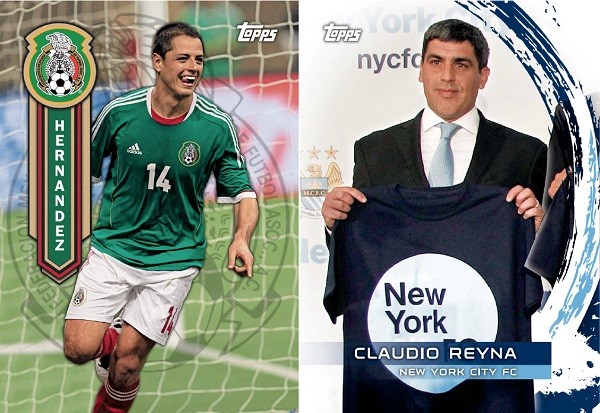 The Topps Company, Inc debuted their new Major League Soccer (MLS) months after signing a new six-year deal with the American soccer league. The 2014 MLS series will feature a subset focusing on Mexican national soccer team stars such as Manchester United's Javier "Chicharito" Hernandez (L - #14) and an "Icon Series" featuring US stars from the 1990s that help put the league on the map such as newly appointed director of football operations for the expansion New York City FC franchise, Claudio Reyna (R). (Photo : The Topps Company, Inc)

The Topps Company, Inc., launched their new Major League Soccer Soccer (MLS) card set  Monday showcasing not only the stars of the American soccer league and the Mexican national team, but also focusing on the legends of the game that made an impact and the fans that support the league.

Topps, who signed a six-year deal with Soccer United Marketing (SUM), MLS's marketing arm, in May 2013 after the league's contract with Upper Deck expired, will feature advanced analytical statistics never seen before in the industry, powered by Bloomberg Sports. Launched in 2010, Bloomberg Sports use their big business data-gathering methods and applied them to sports, focusing on predictive and performance analytics to create comprehensive scouting reports and data analysis for their clients, such companies such as CBS Sports, Major League Baseball's Chicago Cubs, and English Premier League club Norwich City FC.

"MLS fans are data-driven, and we wanted to embrace that," Maribeth Towers, senior vice president of consumer products for MLS, said to Sports Business Daily. "It was time for in-depth and advanced statistics on the backs of our cards."

Topps' inaugural MLS series will feature several subsets - including the Icon Series highlighting the 1990s stars of the US men's national soccer team such as Alexi Lalas, Eric Wynalda, Tab Ramos, Claudio Reyna, and Cobi Jones, who played in the 1994 US World Cup - while another subset, MLS Maestros, features autographed cards of current MLS stars including Kyle Beckerman of Real Salt Lake, Clint Dempsey of the Seattle Sounders FC, Marco Di Vaio of the Montreal Impact, Chris Wondolowski of the San Jose Earthquakes and Graham Zusi of Sporting Kansas City.

The "24 Under 24" autograph subset focuses on the top 24 rising stars in the league below the age of 24, young players such as Diego Fagundez of the New England Revolution, Darren Mattocks of the Vancouver Whitecaps FC, Jack McInerney of the Philadelphia Union, and Darlington Nagbe of the Portland Timbers.

And with the World Cup just around the corner, Topps has added an international flavor to their new MLS series, with their World Stage Cards highlighting players such as Michael Bradley of Toronto FC, Tim Cahill of the New York Red Bulls, Alvaro Saborio of Real Salt Lake and Landon Donovan of the L.A. Galaxy heading to Brazil to play for their respective national teams in June's World Cup as well as releasing the first-ever Topps trading cards of the Mexican men's national team including Javier "Chicharito" Hernandez of the English Premier League (EPL) Manchester United FC and Giovani Dos Santos.of Spain's La Liga's Villareal CF.

But one of the more unique subsets within the new card series is the MLS Supporter cards, celebrating the passion of team supporter groups such as the Chicago Fire's Sector Latino, the L.A. Galaxy's LA Riot Squad,and the New York Red Bulls' Empire Supporters Club. Topps Brand Manager Zvee Geffen noted the league's ability to attract fans to attend games, drawing 6 million people to MLS games and averaging 18,594 fans per game as part of the reason why he was excited about working with Topps.

"Part of the appeal of MLS is the live experience," says Zvee Geffen, MLS brand manager for Topps, to LatinoPost.com. "The MLS Supporter Group cards are unique because they capture the participation, the cameraderie, the brotherhood of an MLS game."

The league's loyal audience also connects Topps with two key demographics that the company would like to recapture and retain: Hispanics and young customers.

"We have hardcore collectors who will collect the cards regardless of the sport. But beyond that, MLS was very appealing to us because MLS appeals to the 12-to-24 demographic who we lost and have difficulty attracting and [MLS] rates favorable among Hispanics," says Topps associate brand manager Justin Kaplan to LatinoPost.com. "It's a challenge for us but [MLS] expands our reach in two markets we are looking to grow." 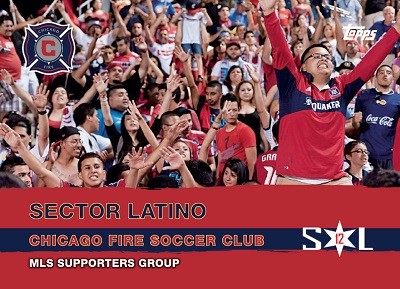