This is Nokia's first Windows tablet, and the first serious venture into slates in years by the Microsoft-owned Finnish device maker. And the Windows RT 8.1 Lumia 2520 tablet looks like it - with a high definition display, built-in Office, and keyboard cover. But it begs the question, do we need both a Surface 2 and a Lumia 2520?

The Nokia Lumia 2520 comes with Windows RT 8.1, pre-loaded with Office Home and Student 2013 edition. It's got a 10.1-inch Full High Definition 1080p display, runs a 2.2GHz quad core Qualcomm Snapdragon 800 processor, and features a touchscreen and physical keyboard cover. And it costs about $500. And it comes from Nokia, which is now owned by Microsoft - so it basically is a Microsoft tablet. 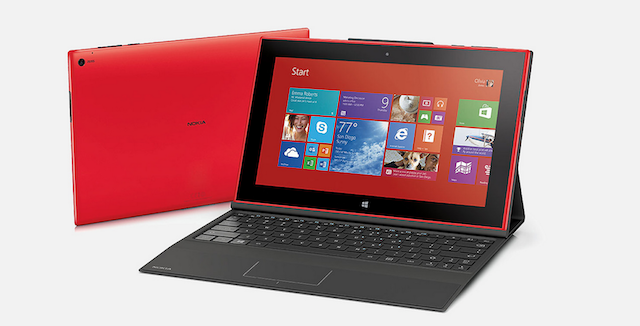 Launched a full month earlier, on Oct. 22, the Microsoft Surface 2 comes with Windows RT 8.1, Office Home and Student, a 10.6-inch 1080p full HD display, a 1.7GHz quad core NVIDIA Tegra 4 processor, and a physical keyboard in the guise of its Type Cover 2. And it's obviously made by Microsoft and costs about $500 - more with accessories and optional expanded storage space.

What's the difference? And do we really need two 10-inch Windows RT 8.1 tablets?

There is a difference between the two, though they are very similar in many respects.

First, being a Nokia device, the 2520 tablet comes in four fun colors: White, glossy red, black, and cyan. This is the very definition of a cosmetic difference, but in the crowded mobile device market - and the increasingly crowded tablet submarket - something that stands out a little will find its fans.

Second - and much more important from a functionality standpoint - the Nokia Lumia 2520 is LTE capable at launch. With its 2.2GHz Snapdragon 800, one of the bleeding-edge mobile processors right now, the Lumia 2520 is ready for the fastest data connections available, and will be compatible with AT&T and Verizon.

Right now, the Surface 2 is WiFi only, limiting its usefulness for a vast swath of power users. That will change in early 2014, as Microsoft told a Reddit AMA that an ARM-based Surface that supports LTE is coming, but for now, Nokia has the corner on this very important feature.

That's $300 for a flagship Windows Phone device and a Windows RT 8.1 tablet that does nearly everything the Microsoft Surface 2 does - as long as you're willing to sign on to the contracts. Smart analysis by TechCrunch's Alex Wilhelm says that this is a gambit to establish a mobile Windows ecosystem of compatible devices and get customers into a Windows-buying "virtuous loop."

That will only ultimately happen, though, if people see the Windows tablet/smartphone duo as worth two years of commitment.