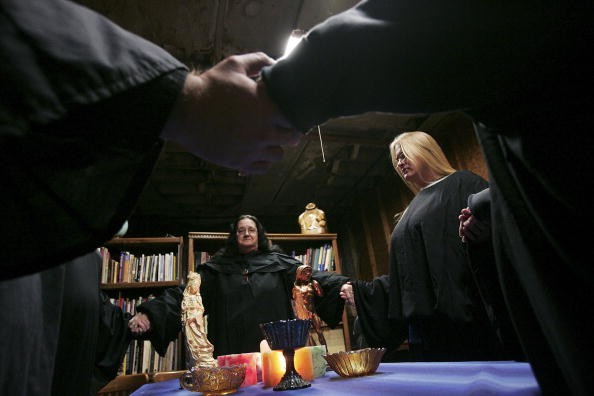 HOOPESTON, IL - OCTOBER 25: Reverend Virginia Powell High Priestess (L) and her daughter-in-law Ashleigh Powell participate in a Wicca Lunar ritual in the temple at the Witch School October 25, 2006 in Hoopeston, Illinois. Wicca is a neo-Pagan religion which uses magic and nature in its teachings. The school, which opened in 2003, offers courses in Wicca theology, hosts seminars and Wiccan rituals at the campus. (Photo : Scott Olson/Getty Images)

Christmas has always been known as the time of the year when Christians celebrate the birth of Jesus Christ. In the commercial sense, it's the occasion when people exchange gifts in whatever forms as symbols of glad tidings. To date, the holiday is known as the year's ultimate celebration of love, peace, giving and goodwill towards all fellowmen.

Yet most people are unaware of pagan origins that made Christmas come to pass. Do practitioners of witchcraft celebrate it?

The answer to this unconventional question is yes, and as told by the Real Truth magazine, "Nearly every pagan nation has observed a 'counterpart' to modern Christmas customs."

Yule, also known as the Winter Solstice, happens to be the one of most magical times of the year for Wiccans. This holy night has long been celebrated by Native American tribes, Norsemen and ancient Romans -- a tradition that lived to this date through modern pagans.

According to Souls Code, the addition of Jesus Christ to the celebration of the Winter Solstice did not come until 300 years after His death. Reportedly, there were some Christian sects that forbade their members from celebrating Christmas because it was, indeed, a pagan holiday.

As described by Witchology.com, many contemporary Christian traditions tend to be "borrowed" from older pagan practices.

For instance, pagans still celebrate the birth and rebirth of the god born from a virgin goddess. The term "virgin" did not apply to a woman who has not experienced sexual intercourse, but to Roman priestesses who were not bound by secular law. These ladies were allowed to take as many lovers as they wanted.

The ever-popular Christmas tree also has its pagan beginnings, as most of the symbols of Christmas. Today, it has been viewed as one of the centerpieces of the holiday and is most often elaborately decorated.

Meanwhile, Souls Code says that gifts were given in honor of friends and relatives who died the previous year. Mourners would exchange "good luck" gifts called Stenae (lucky fruits). People also throw a big feast on this day.

Even traditions such as the hanging of mistletoe over the doorway has ancient origins. Mistletoe, holly and pine are long viewed as fertility symbols by pagans and Druids. Mistletoe was viewed by the Druids as a divine plant, which symbolized love and peace.

Apparently, even Christmas lights around the tree also date back to ancient origins. The lights represented the rebirth of the new God. It also symbolized the return of the light on the shortest day of the year -- the Winter Solstice. Pagans used to light candles in rituals to "lure back the Sun."

Meanwhile, the tradition of hanging ornaments on Christmas trees originate from the concept of "witches balls." These decors are hollow glass ornaments that had been popular in parts of Europe during the 18th century.

These balls have even older origins. They were believed to dispel evil spirits and ill wishes directed toward one's family. They were also thought to entice spirits and trap them inside the bulb, holding them hostage forever.

While celebration of the holiday varies among religions and cultures, its meaning of love has always been universal.

How do you plan to celebrate Christmas?