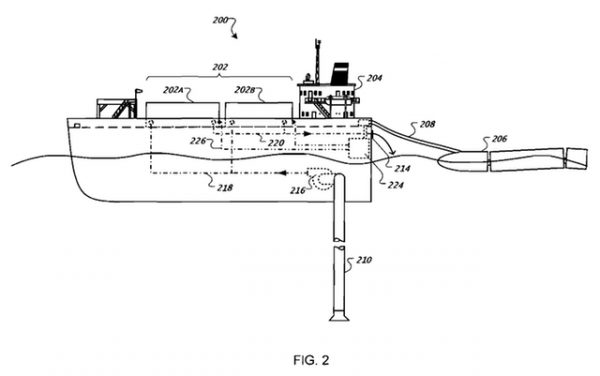 First it was thought to be a mobile data center. Then it was rumored to be exclusively for high-end Google Glass customers. Finally, it's been revealed what Google's mystery barge off the coast of San Francisco is going to be - and it's half massive art project, half floating sales floor.

The San Francisco Chronicle figured out what the mystery Google barge was cooking up, gaining access to documents submitted to the Port of San Francisco that revealed what Google has in mind. As Wired put it, the barges are basically a huge publicity stunt: "a creative way to siphon attention away from Apple, famous for its packed stores and high-profile keynote rollouts."

The Google barge certainly will get some attention. It's envisioned as an "unprecedented artistic structure," according to SFGate, which will sport about a dozen humongous sails in the quest for some huge sales of Google products.

By and Large LLC, which is ostensibly the contractor, as they submitted the documents to the Port of San Francisco regarding the barge, told the San Francisco Chronicle that the 50-foot-tall structure - about 250 feet long when finished - will be a "temporary technology exhibit space" that has huge sails "reminiscent of fish fins, which will remind visitors that they are on a seaworthy vessel."

"We envisioned this space with community in mind," By and Large said, according tot the Chronicle, "a surprising environment that is accessible to all and inspires conversation about how everything is connected - shorebirds, me, you, the sea, the fog and much more."

The goal is to drive interested visitors to the waterfront, which looks like a pretty achievable task, given the huge art-project look of the plans. "We believe this curious and visually stunning structure will be a welcome addition to the waterfront, an experience unlike any other," the proposal says. The company says it can see up to 1,000 visitors a day boarding to check out what's inside.

While the "By and Large" company is reportedly connected to the Mountain View tech giant, Google is still being tight-lipped about the project (perhaps it's worried about the opposite stance "sinking ships"). In fact, the Chronicle had to file a Freedom of Information Act request in order to get the documents, and even after they did, Google didn't acknowledge anything new.

Previous reports, based off a 2009 Google patent for a "floating platform-mounted computer data center," speculated that Google's mystery barges could be used as a sea-water-cooled hub of the internet, providing distributed internet backbone to customers that couldn't be reached by land-based data centers, or floating in to provide the military or rescuers with communications support after natural disasters like a hurricane.

Later, the idea of a sea-based showroom for Google Glass was floated by CBS affiliate KPIX 5, based on unnamed "multiple sources" who told the outfit that it was under the aegis of Google[X], the Google lab that is responsible for Google Glass, as well as other outlandish projects like the (air-based) floating data-center project, Project Loon. It's still not clear if the floating showroom will be used only for Google Glass, but since the project's progress seems to mirror that of the smartglasses (due out for consumers in 2014), finding the wearable computing devices onboard wouldn't be a bad bet.