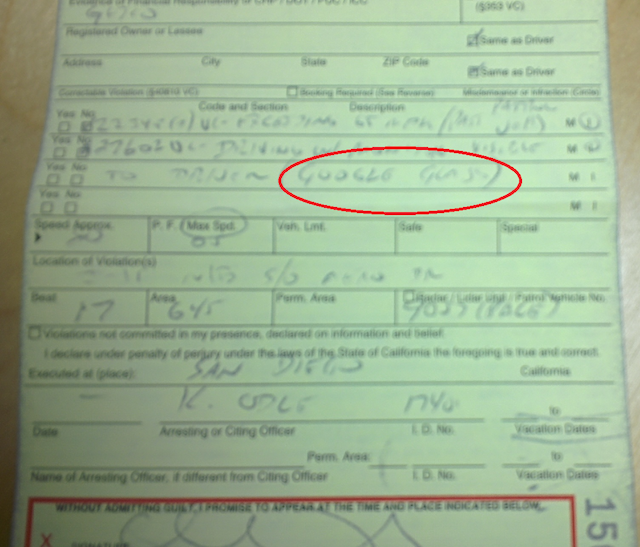 The first of what may be many tickets for wearing Google Glass was handed out earlier this week. On Tuesday, a Google Glass Explorer, Cecilia Abadie, was pulled over and ticketed for using the wearable computing device while driving in San Diego.

The Google Glass device wasn't actually singled out as the distinct cause of the traffic stop: Abadie was pulled over for speeding. And the smartglasses were cited as part of a general ban on using viewable monitors while driving. According to Abadie's Google+ account, "The exact line says: Driving with Monitor visible to Driver (Google Glass)."

Still, Google Glass Explorers began a (tongue in cheek) #freececilia campaign - after Abadie's first post about the incident appeared on her Google+ account, saying ""A cop just stopped me and gave me a ticket for wearing Google Glass while driving!" She also asked, "Is #GoogleGlass [illegal] while driving or is this cop wrong?"

The police officer was not wrong, under California Highway Patrol vehicle code section 267602 (via CSMonitor) which says, "A person shall not drive a motor vehicle if a television receiver, a video monitor, or a television or video screen, or any other similar means of visually displaying a television broadcast or video signal that produces entertainment or business applications, is operating and is located in the motor vehicle at a point forward of the back of the driver's seat, or is operating and the monitor, screen, or display is visible to the driver while driving the motor vehicle."

But some Google Glass wearers and other supporters- very un-tongue in cheek - are reacting to this citation, saying that singling out Google Glass as the same as any other video or television screen is not fair. "That law is amazingly ambiguous," commented Matt Abdou. "If this law is enforced for Glass then that means nobody can drive a vehicle with a phone, tablet or GPS mounted in front of the driver as they can all be made to show video."

Using GPS or navigation is not illegal in California though, just if entertainment or business applications on the monitor are displayed and operating. For Abedie's part, she says she wasn't using Google Glass at the time - even for navigation purposes, but purportedly the officer thought that the monitor over her eye was an obstruction to her view of the road. Some might argue that using GPS is itself a danger to road safety.

Abadie is not planning on making a big fuss out of the ticket though, saying later in the Google+ discussion thread spawned by the ticketing incident, "I agree +Chris Sewell  on not taking it too seriously. I would not accept money from anyone, but I think Glass is the best hands free device out there at the time and hope some lawyer wants to help clarify this."

The incident does bring into focus the constant challenge to lawmakers to accommodate and regulate the use of new technologies in a fair and practical way - something that the law often lags behind in doing.

FOLLOW: Google Glass, google, Technology and Law
© 2015 Latin One. All rights reserved. Do not reproduce without permission.