Climate Talks, COP21 and the Americas 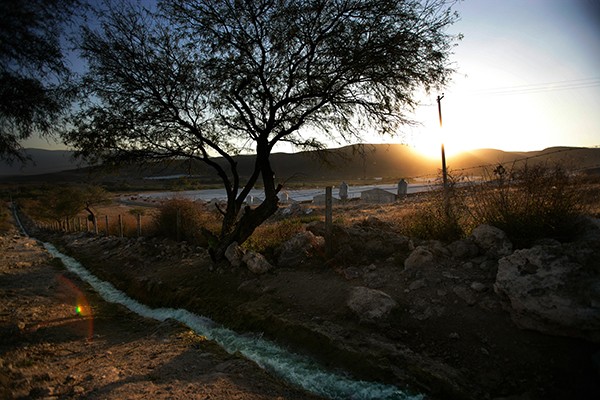 TEHUACAN, MEXICO : A diverted stream flows past a large chicken farming complex, February 4, 2006 in Tehuacan, Mexico. The Tehuacan Valley South-East of Mexico City has long experienced severe water shortages. Drought and climate change have contributed to this but recent industrial growth has also placed tremendous strain of a very limited ground water resource. Big industry has taxed this resource so severely that many small farmers and rural people have had no choice but to move closer to the cities and abandon their traditional lives. Water resources in the area area largely based on a weekly delivery by truck as well as collecting water from small pools known as Jagueys. This collected water was traditionally only used for animals but now more and more people are relying on it as a water source for crops and for drinking and bathing purposes. (Photo : Photo: Brent Stirton/Getty Images)

In December, world leaders will gather in Paris for the United Nations' annual Conference of the Parties (COP21) the aim is to get a binding agreement to which countries will commit to keeping global temperatures from rising beyond 2 degrees celsius.

Everyone has a stake in the talks and an agreement may be on the horizon.

Many countries in the Americas have set ambitious goals heading up to COP21. A few have submitted climate proposals while others are setting goals in greenhouse gas reductions ahead of the climate talks.

According to the Americas Society/Council of the Americas Brazil has set an ambitious 43 percent in greenhouse gas reductions by 2030 while Mexico is planning to cut black carbon and Ecuador is aiming for a 90 percent rate in hydroelectricity. Argentina has set a goal to reduce greenhouse gas emission by 15 percent by 2030 based on their 2005 levels. Bolivia on the other hand has not set a set target for lowering their emissions citing their low ecological footprint and its lesser development compared to other countries in the region. Chile citing 2007 levels has aimed to reduce greenhouse gas emissions by 30 percent by 2030. And Cuba has yet to submit emissions target. Ecuador for its part has committed to reducing greenhouse gases by 25 percent by 2025, its commitment could increase to between 37.5-45.8 percent if there is an availability of international resources. It also plans to get up to 90 percent of its electricity from hydroelectric plants. Ecuador plans to restore more than 1.2 million acres of forest by 2017 with an additional 247,000 acres every year after that until 2025. And Mexico, has committed to reducing greenhouse gases by 25 percent by 2030 based 2013 levels. It also aims to have zero deforestation by 2030. And finally, Venezuela has not submitted target reductions in emissions.

In December 2014, Peru hosted the 20th Conference of the Parties to the United Nations Framework Convention on Climate Change (COP 20), giving a voice on Latin America's role in combating climate change. According to COP21, the facts on the Americas are:

- This region is directly responsible for only 12 percent of global emissions of greenhouse gases.

According to COP21, the international political response to climate change began at the Rio Earth Summit in 1992, where the 'Rio Convention' included the adoption of the UN Framework on Climate Change (UNFCCC). This convention set out a framework for action aimed at stabilising atmospheric concentrations of greenhouse gases (GHGs) to avoid "dangerous anthropogenic interference with the climate system." The UNFCCC which entered into force on 21 March 1994, now has a near-universal membership of 195 parties. The main objective of the annual Conference of Parties (COP) is to review the Convention's implementation. The first COP took place in Berlin in 1995 and significant meetings since then have included COP3 where the Kyoto Protocol was adopted, COP11 where the Montreal Action Plan was produced, COP15 in Copenhagen where an agreement to success Kyoto Protocol was unfortunately not realised and COP17 in Durban where the Green Climate Fund was created.

In 2015 COP21, also known as the 2015 Paris Climate Conference, will, for the first time in over 20 years of UN negotiations, aim to achieve a legally binding and universal agreement on climate, with the aim of keeping global warming below 2°C.

In 2014, COP20 held in Lima attracted over 15,000 official delegates, and negotiators concluded talks with the 'Lima Call For Climate Action', a draft document that lays the foundations for a new global climate deal.

Alongside COP20, there were more than 400 conferences in which new research projects and initiatives were presented. The Sustainable Innovation Forum 2014 was the largest commercially-focused event during COP20, attracting high profile speakers, celebrities and over 500 pre-approved delegates representing private sector, government, NGO, UN agencies and civil society.

FOLLOW: climate change, cop21, Paris, the americas
© 2015 Latin One. All rights reserved. Do not reproduce without permission.