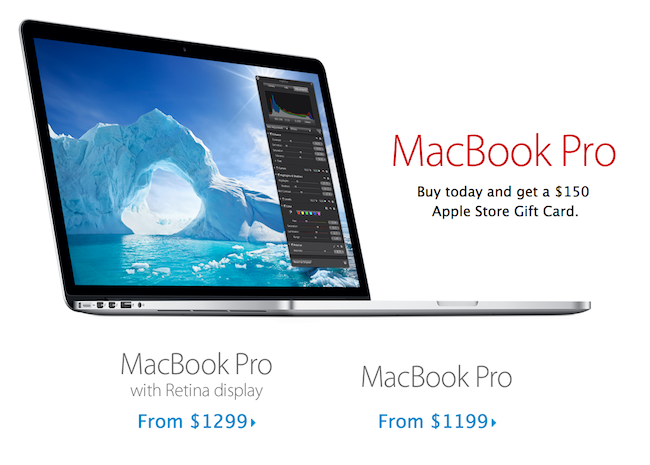 Apple disappointed some prospective iPad buyers on Black Friday, offering discounts in the form of gift cards that couldn't compete with other retailers.

The Cupertino giant offered Apple Store gift cards for some select products, in what seemed like a token attempt at competing with big Black Friday retailers like Wal-Mart, Best Buy, and Target. Of course, they're just competing in retail - those stores are all selling Apple's own products - and Apple is expected to come up big from the holiday season again.

As far as Apple Store deals on its iPads, the iPad Air - which starts at $499 - will get you a complementary $75 gift card to the Apple Store, while the older iPad 2 and original iPad mini come with a $50 gift card. The iPod Touch also gets you a $50 gift card, which is a better deal, considering the device starts at $229. The iPad mini with Retina display comes with no discount or gift card whatsoever from Apple.

A lot of the tech deals this season involve gift cards rather than plain doorbuster discounts, but other retailers are beating Apple in the iPad gift card race. Target, for example, is giving customers who buy the iPad mini or the new iPad mini with Retina display a $75 gift card to their store. The full sized iPad 2 comes with a $100 gift card. Instead of a gift card, Target just discounted the new iPad Air by $20.

Meanwhile, Apple notably did not offer any deals on its iPhone 5c or iPhone 5s, but Wal-Mart is. The big blue box store is giving out $75 gift cards to their store for either new iPhone model through the weekend. Wal-Mart also beats the Apple Store's $75 gift card with a $100 store gift card complementary with the purchase of an iPad Air.

And while Apple offered its largest gift card discounts for new iMacs, MacBook Airs, and MacBook Pros - buying one of those from the Cupertino giant's own store will get you a $150 gift card - Best Buy is offering Apple computers with as much or more of a discount, and with no gift card shenanigans. Depending on the model and configuration of an Apple laptop or computer, Best Buy is dropping the price between $150 and $200 for Black Friday.

Interestingly enough, the majority of Apple Store gift card deals were for non-Apple manufactured products. The Apple Store offers $25 gift cards for a slew of products ranging from printers to iPhone accessories to guitar inputs, and $50 gift cards for certain Beats headphones, video cameras, and even the Nest Learning Thermostat.

Why the gift card mania this Black Friday - be it Apple, Target, or Wal-Mart? According to CEB TowerGroup via ComputerWorld, businesses have increasingly used gift card "discounts" in a money-saving gambit that relies on customers' laziness. The firm says that in 2013, about $1.7 billion in U.S. gift cards went unclaimed. While expiration dates on gift cards have become less common (as they're clearly designed to simply take customers' money), customers still lose gift cards or simply hold them in their wallets without thinking to use them, meaning the company gets to keep the money offered in a discount. And if customers bring a gift card into the store, there's a good possibility they'll spend more on top of the gift card - a no-lose situation for retailers.